It’s going to be a vintage year, I can feel it in my bones. I’m embarking on the making of a new show called ‘Ugly Chief.’

It’s about death, relationships and the funeral process. In 2013 my TV antique dealer celebrity dad was diagnosed with a terminal illness and given a short time to live. After a year of thinking he was going to die the doctors told him that they had made a mistake.

When we found out that dad was OK I asked him if he would collaborate with me on a new theatre show – he said yes. We decided that the show would take the form of dad’s funeral.

In my signature ethnographic approach to creating work I am going to train to become a funeral director to demystify the British funeral system. An aim of the show is to destroy the taboo around talking about death.

But don’t worry it will still be funny. Dad’s first words to me in the rehearsal studio were “imagine me as a sponge with no face.” I have no idea what that means.

Hair Peace will be embarking on a national tour. I have been back in the studio with this baby and it’s looking good. In retrospect the show wasn’t ready in time for Edinburgh last year. Unlike my cooler colleagues who succeed brilliantly in premiering shows at the fringe and tweaking them along the way, the idea of presenting something incomplete freaked the hell out of me. I have learnt many lessons. I can’t wait to share the new version with you.
Hopefully I will get to see most of you this year. 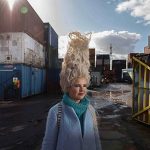 Victoria Melody
Victoria Melody is an award winning British artist with a background in fine art. She makes theatrical shows, performances and films mainly about Britain’s pastimes, passions and tribes. Fascinated by anthropology, she immerses herself into communities and becomes an active participant in their rituals as research for her work.
Previous Post
Victoria Melody: “A Very Big Character”
Next Post
New Orleans and the Battersea Arts Centre bedrooms