Victoria Melody’s hard to pin down. She’s a live artist who specialises in metamorphosis, slotting seamlessly into British subcultures that have rituals and social codes of their own. Her past performances have turned her into an angry office worker, a police officer turning audience members into photofits, a tassle-twirling showgirl, a gameshow hostess, and even a wannabe pigeon fancier. Some personas last for just a night, some take years of research.

Her victory in the 2012 Mrs Brighton contest fell into the latter category, and she documents the monumental effort of putting herself through the beauty circuit as she showed her morose basset hound in competitions in her touching, hilarious performance Major Tom.

“I went down to a size 8, I had fake tan, I had massive eyelashes, I had blonde hair”

The hound was a gentle presence, unbiddable and huge ears unflapped by the pressures of a frighteningly superficial world: Melody explains that “the beauty pageant people were a lot bloody nicer than the dog show people.” But although the Crufts crowd tore her dog’s physique to bits — “I feel so angry that his personality was never taken into account!” — there was a more insidious kind of criticism at play in her time on the beauty pageant circuit. She took advice from fellow competitors, encountering a whole industry of waxing, slimming, and “constantly being sold other people’s ideal perfect me. And you know what’s wrong with me?” 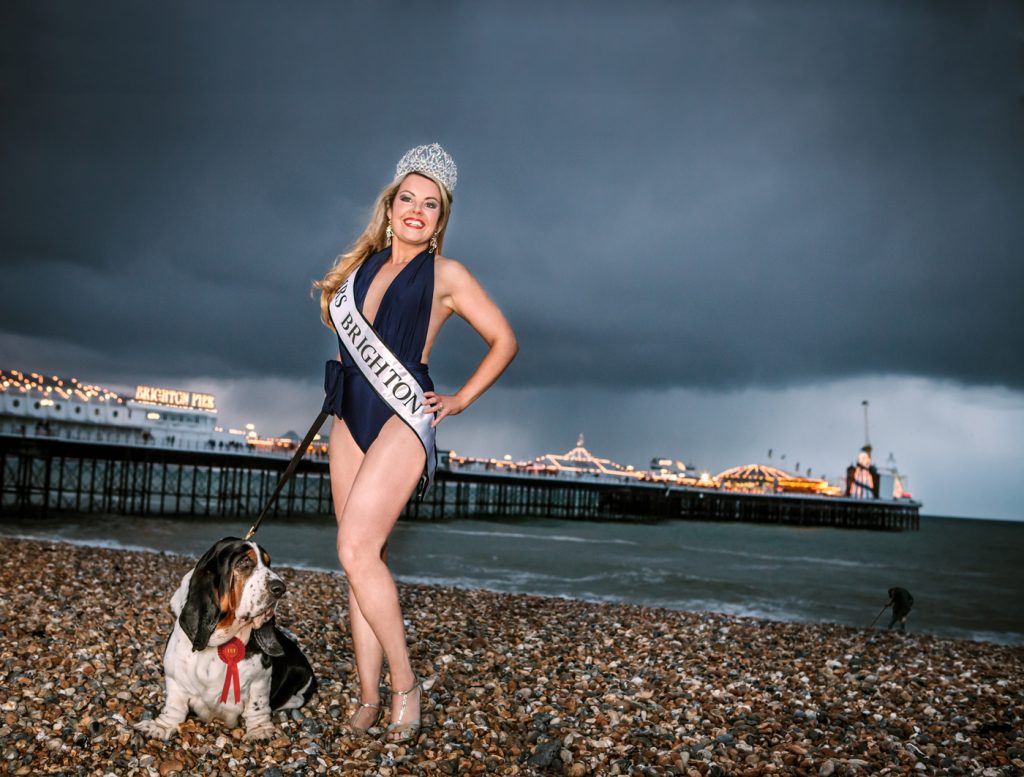 So her newest performance, Hair Peace, “is the antidote for Major Tom. It’s me getting angry and asking questions about the beauty myth and people’s perceptions of identity and consumption.” To get closer to these questions, she’s working with her niece Beverly, who still wears and loves hair extensions while Melody’s hair-swishing days are gone. Well, not quite: Melody’s hung on to three ponytails of real human hair left over from her pageant days, and made a performance based around her DNA-scrutinising, plane-hopping journey to find the real human heads they came from.

Beverley’s involvement, both through advice and through pre-recorded footage, is crucial to the success of the piece. Melody explains that “when I asked her if she wanted to be involved, I was very honest with her. I said some people are going to think you’re very superficial. but you know what, that’s because they’re judgemental because they’ve never met anyone like you, because they’re posh. And I think she speaks really articulately [about her decision to wear human hair extensions] and her argument is valid. She’s a single mum and has brought up an amazing son on her own, and lives with the stigma day to day of being a young mum. She wants to look a certain way, and she’s a strong woman.”

Beverley is open about the pitfalls of wearing hair extensions, as well as the pleasure they bring her. She talks sleepless nights from the lumps of glue that attach them, of hours in the hairdressers and of an expense she now hates going without. But Melody is clear not her performance isn’t an exposé, either of the British beauty industry or of the hidden supply chain that stretches from Essex, to Russia, to India. “I’m very careful not to exploit people, and I come under fire because of that. People say I’m not taking enough of a stance. But the thing is that I’m an artist, I’m not there to preach, I’m there to present stories for you to make up your own mind.”

Her approach in Hair Peace focuses on questions, as much as answers. Her journey took her to India and Russia to investigate how human hair is harvested and sold. She recalls that “when I set out on this project I expected just to find absolute exploitation, and for it to be a really evil, horrible business. But in a way I didn’t find that, although the inequality is there of course. What came across was that we’ve got these Western preconceptions.”

‘Don’t come over here and judge me because our worlds are pretty fucking different, don’t be so naive’

Indian hair is donated as part of a religious ceremony, which Melody plays footage of in her performance: “I spent a lot of time talking to the Indian Embassy, because they will not people film in or near temples. So I did my best to persuade them, and I entered a really interesting discourse about Western preconceptions. Foreign film crews will go to India and film a documentary about surrogacy, and talk about how some poor woman is being paid a pittance. But for the Indian woman, she might be able to buy a house for her whole family, and it’s a life-changing, positive thing for her and her family. So some of it was about ‘Don’t come over here and judge me because our worlds are pretty fucking different, don’t be so naive’. In the end, I got permission and the people at the Embassy told me “Victoria Melody, you are a very big character.”

She is. She’s warm and genuinely enthusiastic about people, which lets her get under the skin of these worlds without seeming voyeuristic or exploitative. But Hair Peace isn’t really about her — it’s emotional heart comes from the Skype meeting between Beverley and an Indian woman called Neeharika, who Melody accompanies on a pilgrimage to sacrifice her hair. Chris Rock’s brilliant documentary Good Hair explored the ritual of donating temple hair, too, but there was something dehumanising about the way that the Indian women who were going through an intensely personal religious experience were seen being herded through a system, like sheep.

By focusing in on Neeharika’s experience, Melody’s able to fill in the emotional landscape, as well as the economic landscape, of hair donation. “She was so thankful that she’d managed to become independent of her parents and to lead the kind of life she wanted to lead. The relationships I make are very genuine and very real – we’re still in touch, and she’s doing so well and working so hard.” Neeharika is almost disconcertingly pragmatic about the economics of the process: “She was absolutely fine with the fact that Beverley might be wearing her hair, and Beverley liked finding out who it was from. It was insane, seeing supply and demand right in front of me in the form of these two humans.”

Melody’s view of the hair extensions industry is far from rose-tinted. She points to the lice she discovered on ponytails in Russia, suggesting they’d been forcibly cut from prisoners, and to her doubts that 70% of £22 billion pounds Indian temples make from selling hair actually goes to charity, as promised. “I’m always suspicious of organised religion — is the ceremony just a manufactured way to get loads of money out of people who can’t afford to give money in any other way? But then you can’t knock the emotion of witnessing how people felt after having their heads shaved. The reason that this is a performance, not a documentary on the television, is because I can tell it the exact way it was, from the heart.”

“I’ve always had quite a good relationship with death. Dad made me memorise his funeral details when I was seven years old…”

There’s a similar mix of emotion and economics, all tumbled together, in her new performance Ugly Chief. It’s a performance about funerals made after her dad, television antiques expert Mike Melody, was wrongly given five years to live by doctors. Melody junior will be interning in two separate funeral parlours, and looking forward to an audience inhabited by his daytime TV fans. “He’s never conformed, he’s a very funny and complex character. There’s no one else like me and him in our family, and I don’t understand why we’re this pair of weird show-offs. I thought it was sad that he was going to die and we were never going to collaborate: he never finished his studies so he’s got a real frustrated artist in him. So when we found out he wasn’t going to die, I asked if he wanted to make a show with me and he said yeah.”

The performance isn’t quite as weird, or morbid, as it sounds: “I’ve always had quite a good relationship with death. Dad made me memorise his funeral details when I was seven years old because he was very overweight, drank a lot, smoked a lot, and ate terribly, so he wanted to prepare me.” But it’s still a dazzling weird journey, from tracking dead hair to embalming dead bodies. Melody’s even planning to become a part-time funeral celebrant if it works out. It’s another role that makes a funny kind of sense, with compassion, commercialism and deep-buried oddness all wrapped up together in one, charismatic whole.

Victoria Melody
Victoria Melody is an award winning British artist with a background in fine art. She makes theatrical shows, performances and films mainly about Britain’s pastimes, passions and tribes. Fascinated by anthropology, she immerses herself into communities and becomes an active participant in their rituals as research for her work.
Previous Post
A Little Fing I Wrote For the Guardian
Next Post
Ugly Chief and Hair Peace National Tour