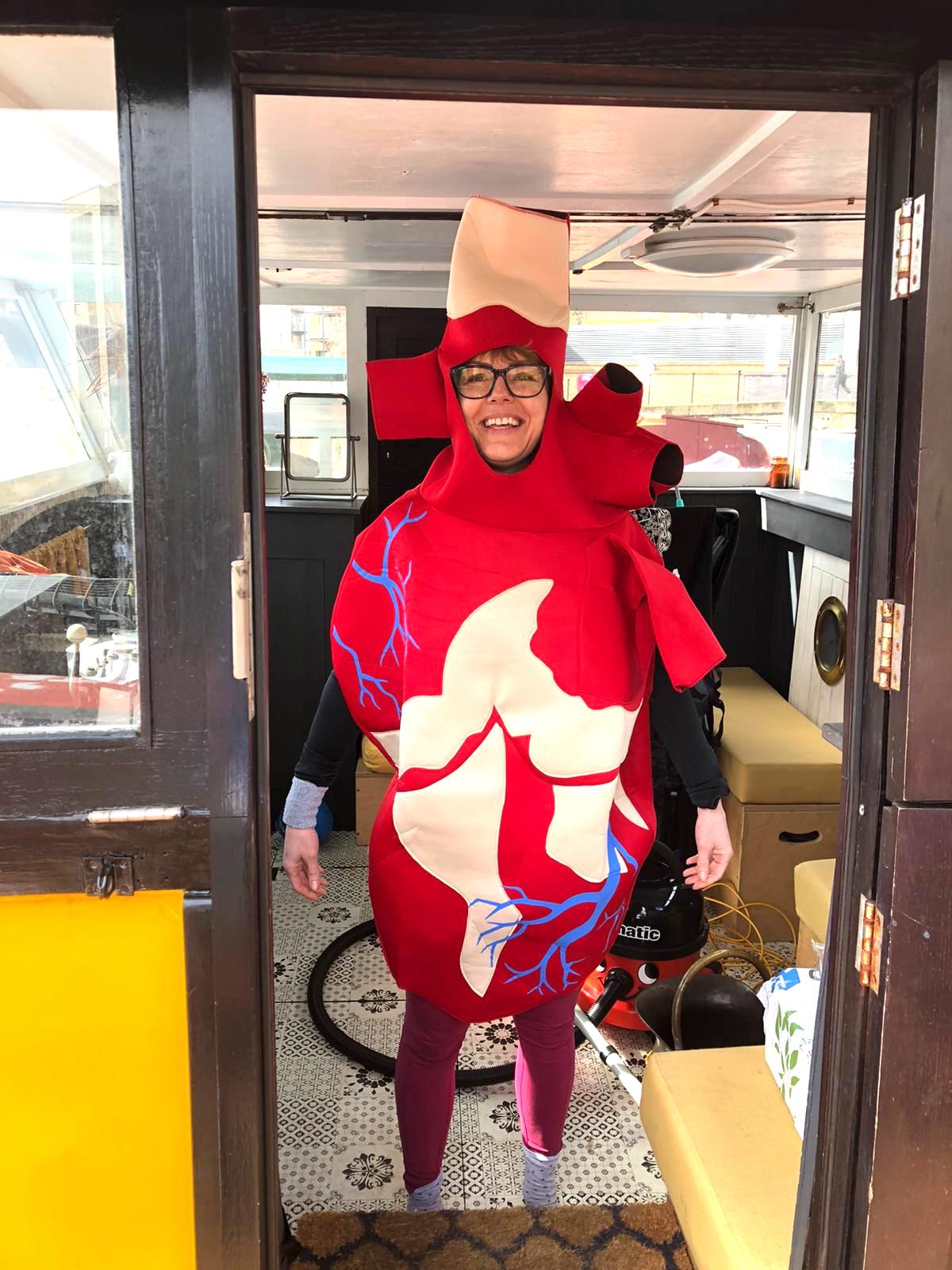 I have never watched so much telly in my life. Other things that have been going on is…I did an online version of my new theatre show now called “Head Set” (so new it’s not updated on my website yet!) for Normal? Festival of the Brain. It was weird presenting an early version of a show that hasn’t been developed in a physical room with my team first. The devising sessions were done online. I mainly worked alone on my boat, apart from the odd Zoom. My neighbours are now quite used to me walking around in ludicrous costumes, banging a drum and talking to myself.

I performed the show from Artista an open mic comedy venue in Brighton. I had one rehearsal day with my technical manager before the show day. The online show was performed over zoom. There were limitations using lighting and sound on Zoom. Not only did I feel the pressure of presenting a new piece, I didn’t know if it was any good as it hadn’t had the normal in-the-room-feedback from the team who normally consist of Musical Director, Producer, Designer, Creative Technician (if there’s creative tech) and Director.

Performing to an online audience wasn’t too much of a problem. Throughout lockdown I’ve been performing at online comedy gigs. I’m in the minority but I actually love them, there’s no traveling, you can do silly camera trickery and you can plop on your sofa after and still have time to watch Line of Duty. I’m terrible at remembering names IRL, good news Zoom displays the audience’s names. The trick to a successful online gig is creating a bubble with the audience and performers, so it helps to bring people in by calling them by their names. I’ve started doing some comedy MC’ing, I prefer this now from doing ordinary spots. You get loads of stage time and there’s less pressure to be funny. An act finishes their set and I’m like “it’s me again!” an attention seekers dream.  The MC’s role is to elevate everybody else, if you are a good party host then MC’ing’s for you.

I started stand-up as research for my theatre show and to improve my performance. It wasn’t my intention to continue doing it once the show was ready. But it really has been a lifesaver during lockdown. Performing one or two nights a week has meant that I’ve continued to exercise that muscle. In fact, from going online, I’ve actually improved and written loads of new material. Some of my colleagues are worried about doing in person gigs again because they’ve not been performing online. They’ve been out of the game for so long that they feel rusty. They shouldn’t worry when I did in person gigs between the lockdowns, the audiences were just over the moon to be out. Oof I just had a flashback of when I did a gig in Austin, Texas at a pro night full of people off the telly. I’d only started gigging and had no business performing there. The audience were so silent you could hear a chicken cooking on a rotisserie in the kitchen. Doing stand-up has been great actually because now I’m never going to be scared of a theatre audience again, theatre audiences are in fact, dreamy.

The online theatre show of “Head Set” couldn’t have gone better. There were technical difficulties ala Zoom, the audience couldn’t see me at one point – I tried to carry on but, in that moment, I realised how dependent on visuals my work is. I continued the gig on my technician’s computer. The audience kept their cameras and microphones on giving it the best chance of feeling like a real gig in real life. There were even a couple watching on a train, they had to turn off their mic because of announcements on the train tannoy.

I don’t want online gigging to be the only type of gigging. I go to the theatre so I can be in the company of other people who love theatre. I see performing online like a side dish, like stand-up comedy has also become. The main dish is the steak but now I can also offer you a side of online and a garnish of stand up.

It’s starting to look likely….God I hope so… that I’m going to be in a room with the team. Don’t mess it up Boris. We have some (gasp), on a stage with a real audience, gigs of “Head Set” kicking off on 7th October in Reading South Street. A brilliant supportive venue that has rescheduled this date 3 million times. We will be testing out the live format of the show.

Then hopefully touring properly in 2022, if there is still a touring circuit. I would love to take it to Edinburgh but I don’t want to sell my liver or is it kidney? Actually, my liver wouldn’t be worth much.