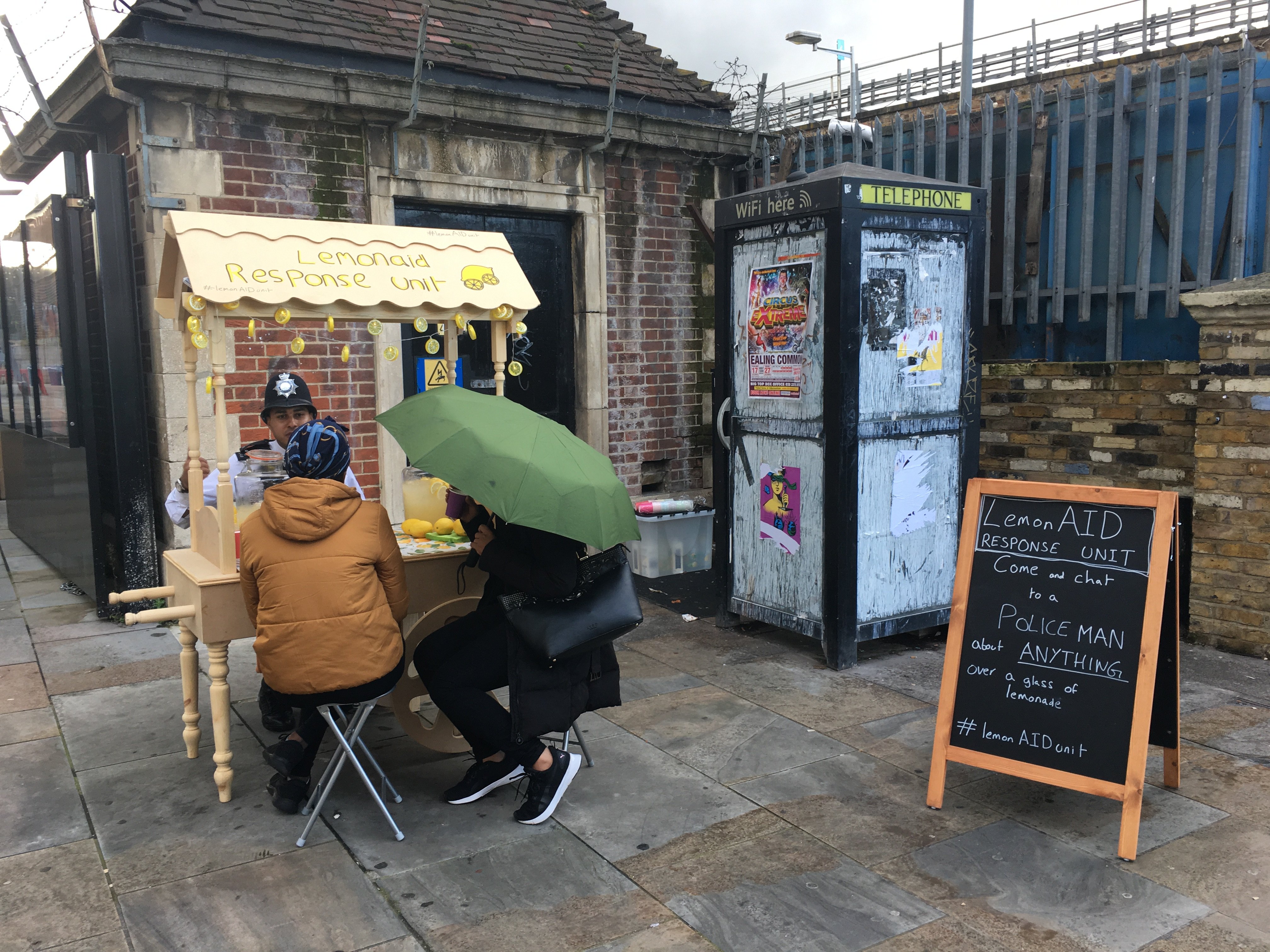 The LemonAID Response Unit comes from a collaboration between myself artist and the Metropolitan Police. It was commissioned through Battersea Art Centre through their Agents of Creative Change program. The idea behind the program is that people who work in the public sector come to artists with a challenge and the artist helps them come up with a creative solution. My police officer came to me with the problem – everybody hates the police. So just a small problem then. Obviously, I could not solve this ingrained issue but I could invite conversation in a controlled environment. The public are invited to share a glass of lemonade with the Police Officer in exchange for a question. If the public and police live in fear and mistrust with one another what can happen if they meet informally outside of the station and engage in one and one conversation. Can opinions change when stereotypes are broken down on both sides of the conversation?

The public usually only communicate with the Police during stressful situations. The uniform often elicits fear and authority. I wanted to find a way to counteract the intimidating image of the person in uniform. I came up with the idea of a lemonade cart it would be the opposite of the uniform – kitsch, handmade, bold and childish. The juxtaposition of the police officer and the bright lemonade stand is inviting to the public who want to interact with it.

In addition to the Police Officer being asked questions. Myself or an associate artist is always with the cart. We are there to answer questions about why this is art and to explain the project it’s themes and intentions. As this intervention often happens away from an arts organisation people that come across it are not expecting an art intervention. For many people when they think of art they think of paintings or sculpture. We are there to explain that art can be anything you want it to be and that everybody has the capabilities to be an artist.

Since we started this project relationships between the police and public have continued to deteriorate. The public are asking for reform. I understand that conversations between the public and the police could be contentious right now. This is why it is absolutely the right time to be doing this project. For me the role of art should be to confront important political and social issues.

I love LRU. The Police Officer I’m working with and I always finish the piece feeling invigorated. We have communicated with people from different demographics and from all walks of life that you don’t come into contact with every day. You have enriching and surprising conversations. In my art practice I don’t often come into contact with a group of 15-year-old lads from South London or a pair of Mormons from the USA. Then have conversations with them about politics, art and what our lives are like. It’s just a short snippet in time but we experience what it’s like to be somebody else. It’s only a small intervention that goes a long way to breakdown stereotypes for everybody involved – the Police Officer, the public and myself included. The LemonAID Response Unit is a simple idea with radical intentions to break the cycle of stereotypes and create social capital between the police, young people and the community. I like that it’s really fun yet has the capacity to change how people think.

LemonAID Response Unit is having an outing on 25th and 26th June in Oxford as part of Offbeat Festival.