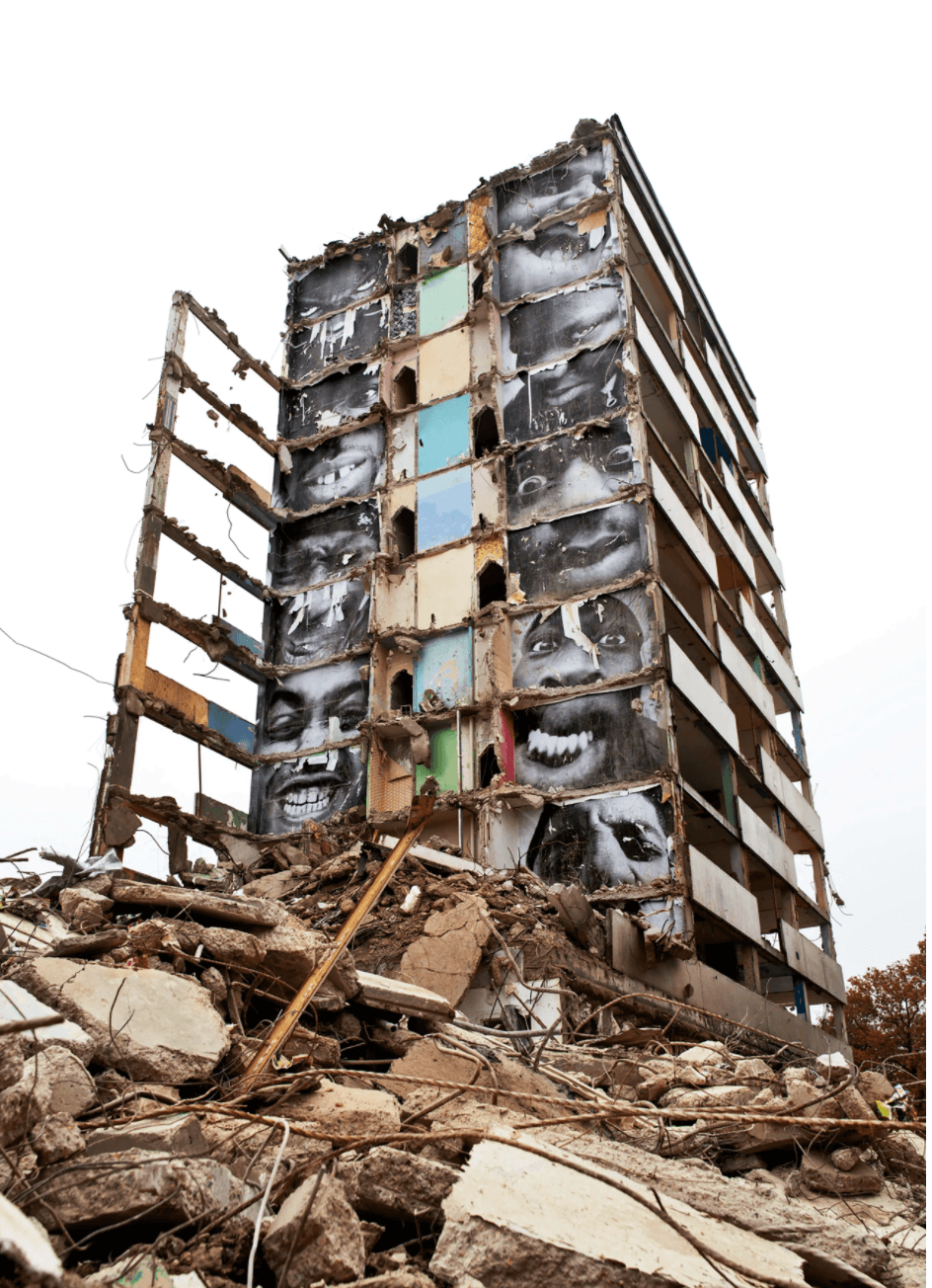 I went to see the best exhibition I’ve seen for ages JR at the Saatchi Gallery. I can’t believe I hadn’t heard of this socially engaged, graffiti artist before. Here’s his Ted Talk. The image above is “Portrait of a Generation, Destruction, Clichy-Montfermeil, 2013.”

In 2013 JR learned that the housing towers in Les Bosquets were going to be demolished, so he and his team pasted portraits of local inhabitants in the building before it was destroyed. He said “We couldn’t get authorisation to paste inside. So, we got plans from the former inhabitants, and we entered at night, 25 of us, and spread out over the different floors. We pasted eyes in someone’s kitchen, a nose in someone’s bathroom, and a mouth in a living room….When we came down, the police arrested us, but they couldn’t understand why we had just spent hours in this building that was about to be destroyed. The pastings were so big that they couldn’t see what they were. The next day, when workers started the demolition, the portraits were revealed, little by little, while the cranes were “eating” the building. Only the people who were in the neighbourhood that day witnessed the gigantic spectacle unfold.”

Remarkable 2
A few months ago, I started using a Remarkable 2 drawing pad, it’s like a really light, b&w iPad but without all the distractions. The only things you can do in it are draw and read so it’s the best anti-distraction device especially for my ADHD people. It’s expensive and you could just use paper but the pros are I don’t have to lug 5 different note pads around with me for different projects, all the notes are backed up on a cloud so you won’t lose your notes and the best bit is it translates your hand-written notes into type with what I would say 80% ish accuracy. I’m not getting paid to plug this I just have found it genuinely useful.

Hammersmith Comedy
I’m running a new female, female identifying and non-binary comedy night minutes from Hammersmith Station. On 20th August we’ve got Lucy Pearman “straight from her new TV show” headlining and me hosting, the rest are some of my absolute favourites from the circuit. If you haven’t seen me do comedy yet, now’s the time. I have a cheeky promo code making tickets only £5 for newsletter readers use mcvic. If you find yourself a bit skint at the moment, email me and I will put you on my guest-list. 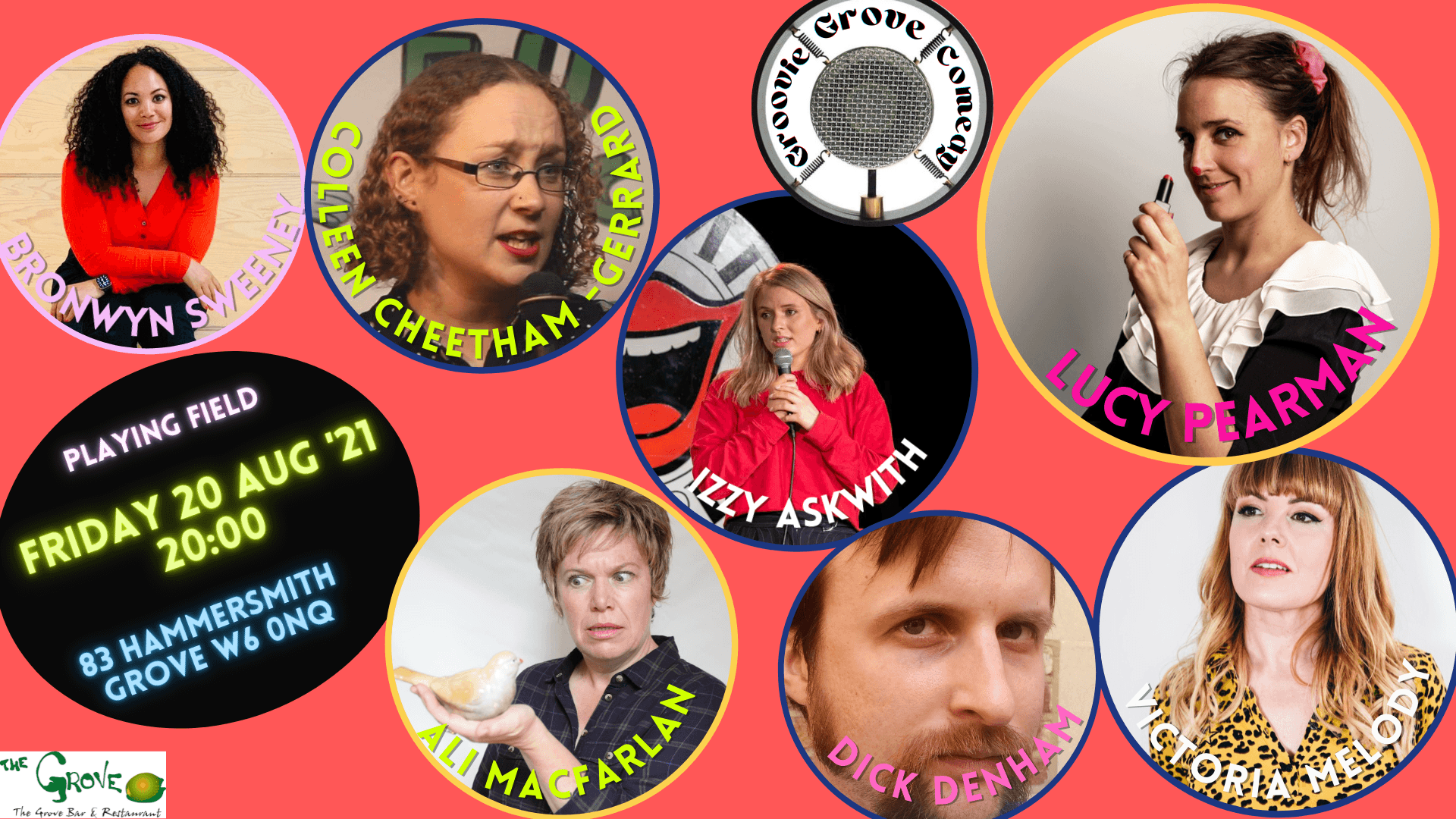 Jerusalem
Quick Mark Rylance is back for a 16-week run only. Get in pronto if you want tickets!

Workshop
2nd September I am running my “Unlock your Genius by Being an Idiot” event for young creatives aged 18 – 30 year old based in the South West of England. It’s pay what you can.

WeCroak App
You know how I made that show with my dad about our mortality? Well, I’ve been experimenting with using a new app. The WeCroak app is inspired by a Bhutanese folk saying: to be a happy person, one must contemplate death five times daily.

Old
We went to the cinema and watched “Old” the new film written and directed by M. Night Shyamalan. And I LOVED it, if you enjoy old B movie and find Freddy Krueger funny if you don’t pay too close attention to the film’s narrative then it’s really enjoyable.

Thanks for reading see you next month!