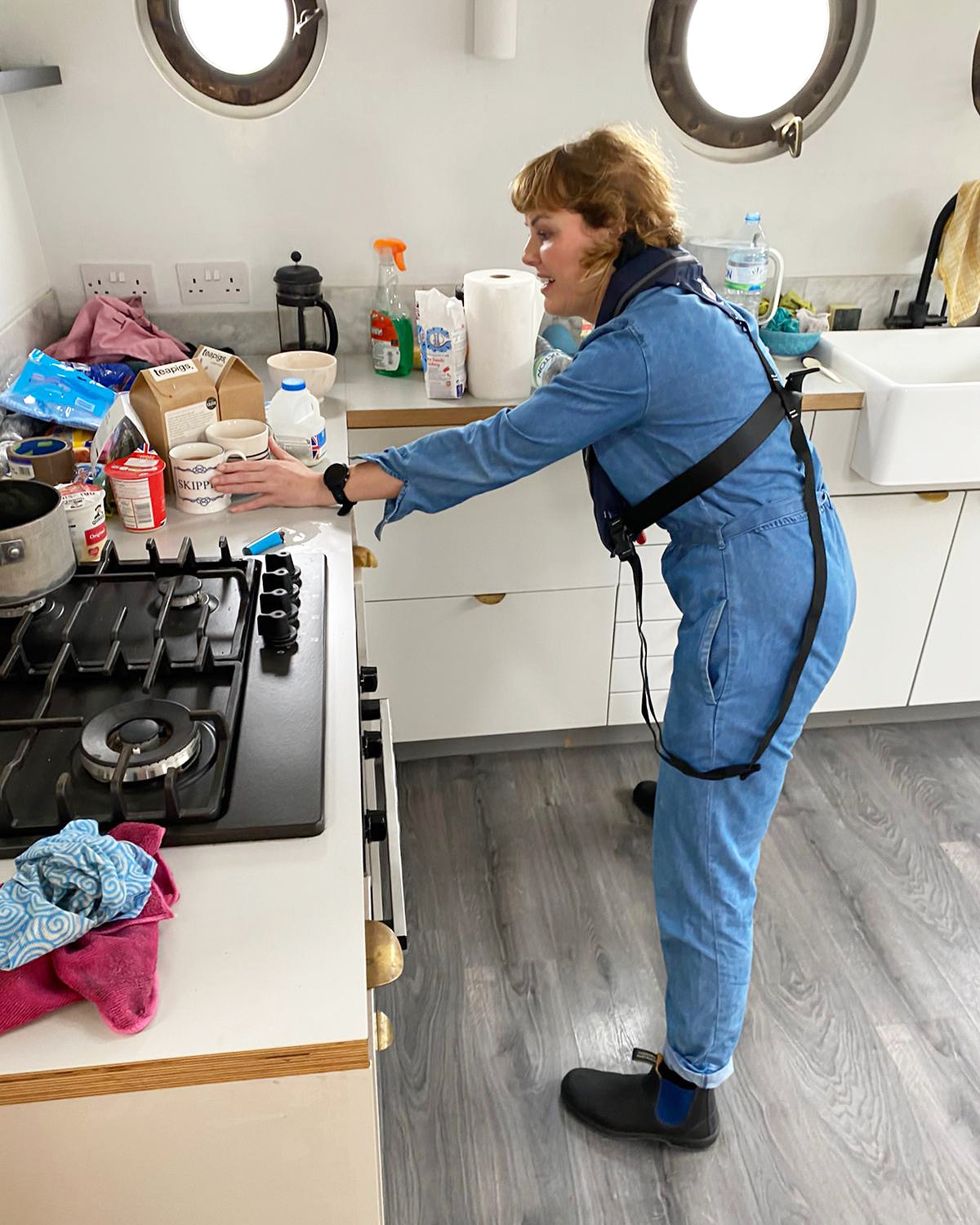 The photo above is an action shot from the summer of me trying to make the crew a cuppa on my boat whilst getting knocked about by waves in the Thames Estuary. I had to take my boat to get it’s bottom scrubbed in Chatham and the journey was hairy – we were on fire at one point.

I survived the boat fire to tell you that I’m hopefully touring an iteration of my newest theatre show in Spring 2021. It was meant to go out in March 2020 but the plague happened.  There are some great venues for the 2021 tour so fingers crossed they go ahead!

I think I might change the name to the short and snappy “Attention”. Do you like it? Will you come if it’s called that? let me know.

I’ve got some new projects coming in 2021. I am especially in love with a project called “The Enthusiasts” more info on this soon.

I started doing stand-up comedy a while ago for research and I’ve got a bit hooked. I love the immediacy of it. Theatre will always be my first love but I also love how responsive and loose stand-up is. You exhibit all the things wrong with you and it’s malleable, you can change it night to night, it’s free and direct you just rock up and do it. It has really quenched my need for performing during 2020 as a lot of it has been happening online.

I’ve set up a monthly online comedy night with Leslie Gold and Dick Denham two of my fav’s from the circuit. Our night champions the voices that are underrepresented in the stand up. Our next gig in Thursday 28th January at 8pm. I will paste the zoom invites all over social media closer to the time.

Lastly, I’ve had lots of people contacting me about how I manage my ADHD in life and in work. I’m always happy to have free one to one sessions with creatives about how I manage but I also wanted to signpost people towards ADHD support groups. I am part of the Brighton and London groups – they are always supportive and informal and it’s great to hear from people having similar experiences to you. There are other groups nationwide and you can find out info about them here. Most of them have moved online for now so you can log on from anywhere. 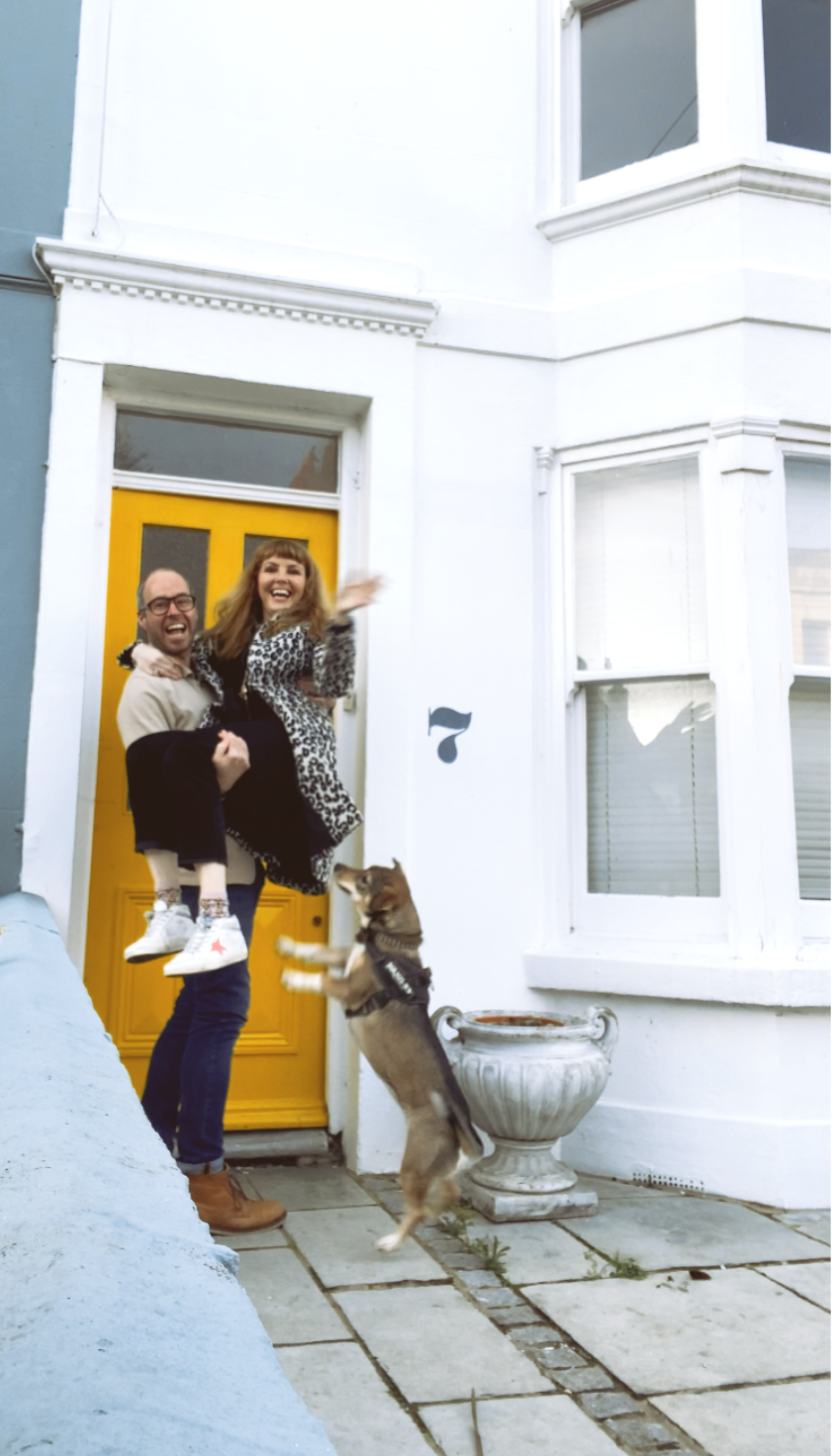 I sometimes live on a boat in London for work but mainly I live on dry land in Brighton. New news is we’ve got a new place in Brighton. The reason we keep moving in Brighton is because my husband is obsessed with street bins, seriously never ask him about them – the vitriol he has for street bins. He managed to find us a place on one of the two streets in Brighton that is bin’less. Jonathan Ross lives opposite he sports an array of really bad tracksuits. This morning he was wearing a Louis Vuitton tracksuit with LV emblems all over it and real fur lined brogues, yuck. Please don’t tell him though as he’s going to be my new neighbour.

Above is a pic of Mitch carrying me over the threshold he’s reluctant because 1. I’m heavier than I look. 2. He said I’ve got the custom wrong as you only get carried if you’ve just got married not because you have a new home, whatever!

You are on this list because you have shown an interest in my work or me. I promise to keep your data secret. But you can unsubscribe from this list at any time.